Why Non-Profits are So Vulnerable to Crisis Risk

Why Non-Profits are so Vulnerable to Crisis Risk

COVID-19 is proving an existential crisis for many non-profits and charities – with falling revenue and sky-rocketing demand for their services. But the reality is that such organizations are equally vulnerable to the whole range of usual crisis risks, and many are simply not adequately prepared.

While every organization should have an effective crisis management plan in place, non-profits face risks which don’t generally apply in the corporate and business sector, exemplified here by angry Greek Orthodox parishioners threatening to halt donations.

Unlike corporations, some non-profits tend to rely heavily on grants, donations, bequests and sponsorships, which can very quickly dry up. Experts calculate that reputation can contribute 60% or more of the market value of a business corporation. But for many non-profits, reputation may be an even more critical asset, which makes them particularly vulnerable to any crisis.

Moreover, non-profits typically operate in a tough market competing for public support and government service contracts, yet there is an expectation of a higher moral standard than might be expected in the cut-throat world of big business.

These distinctions were well captured in Forbes by my Washington DC colleague Richard Levick: “The stakeholders of for-profit organizations – shareholders, vendors, suppliers, their entire supply chain – have a proprietary interest in seeing the organization recover and prosper. That same dynamic is not necessarily true for charities. Non-profit stakeholders are quicker to rush to judgment and perhaps less likely to ‘forgive’.”

The special crisis challenge for non-profits is starkly illustrated by the reputational disaster which engulfed the British charity Oxfam. The international aid organization enjoyed a stellar reputation until revelations in 2018 that some staff had sexually exploited young female disaster victims in the wake of the devastating Haiti earthquake in 2011, and that Oxfam had covered up the scandal for years.

CEO Mark Goldring gave an extraordinarily ill-judged interview in which he accused critics of “gunning” for the charity and that the response was “out of proportion”. He told The Guardian: “The intensity and the ferocity of the attack makes you wonder, what did we do? We murdered babies in their cots? Certainly, the scale and the intensity of the attacks feels out of proportion to the level of culpability. I struggle to understand it.”

It was reported at the time that the CEO gave the interview “unchaperoned by press officers” and Golding later excused himself by saying: “I do apologize. I was under stress.” But the charity’s reputation and finances had suffered severe damage and the CEO was soon forced to resign.

The Oxfam debacle should stand as a warning to non-profits everywhere that if a crisis is not well managed, it’s the people they support who may suffer.

A Parting Thought
Nine-tenths of wisdom is being wise in time.
– Theodore Roosevelt 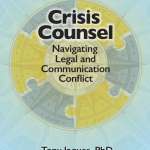