Uber’s Not So Sweet Ride

I talk about the badly conceived strategy of companies waiting and hoping their crisis isn’t discovered in my newly released book Executing Crisis: A C-Suite Crisis Leadership Survival Guide.  Uber’s 2016-2017 hacking crisis is a prime example cited in Chapter 6.  Customers and drivers weren’t angered as much by the fact that Uber had been hacked in 2016, since, let’s be honest, that seems to be a commonplace occurrence now.  They were angriest that Uber waited a year to mention it.

Certainly Uber did a good job responding to the story about 3000 sex assaults during 2018.

When the news did break December 5, 2019, they were prepared with a full-page ad saying they were “100% committed” to getting the 0.1% of rides that end in sexual assault down to zero using the new emergency button that’s recently been added to the app.

But can we truly believe Uber didn’t know there were thousands of sex assaults in 2017 and 2018 until nearly the end of 2019? Did it really take a year of analysis to understand that something was amiss? Or were they simply waiting and hoping the bad news wouldn’t be discovered… again?

Dr. Jo Robertson has a doctoral degree in crisis management and 20 years of experience keeping Fortune 500 companies out of crisis.  She is the author of Executing Crisis: A C-Suite Crisis Leadership Survival Guide. 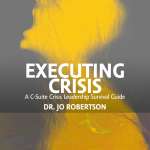